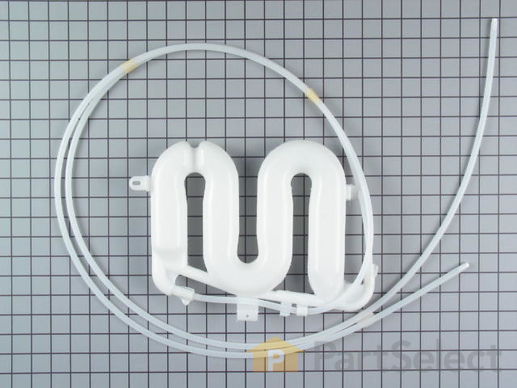 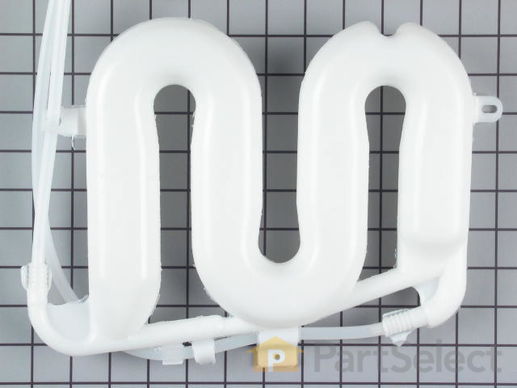 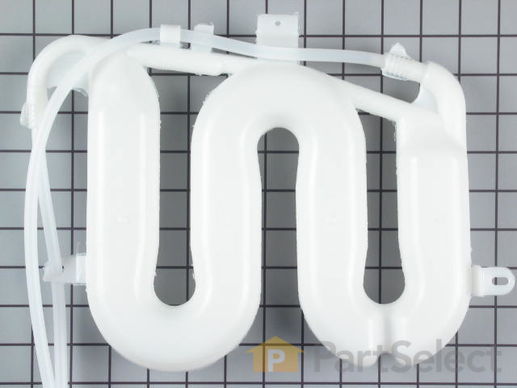 This in-refrigerator dispenser water reservoir tank comes with tubing. This tank stores water until the water actuator is activated and water is requested.

Back to Top
Customer Repair Stories
Average Repair Rating: 3.1 / 5.0, 8 reviews. What's this?
Sort by:
Search filter: Clear Filter
Your search term must have 3 or more characters.
Keep searches simple. Use keywords, e.g. "leaking", "pump", "broken" or "fit".
Sorry, we couldn't find any existing installation instruction that matched.
Leaking water lines fixed.
The problem is the common issue that the proximity of the plastic water lines that leave the electrically controlled valve near the compressor in the bottom back corner of the fridge, means they become brittle and crack/break. Both the line leaving to the ice-maker that runs diagonally across the outside back of the fridge, and the line that runs under the fridge to feed the water dispenser failed at the valve, breaking off just where they start at the valve.

The result was I noticed a big puddle coming out from under the fridge (too late for the poor wood floor).

The solution, replace the parts. For the ice maker line, it is one thin line - its easy to replace other than taking care to uncrimp and recrimp the connection up at the entry to the freezer.

For the thicker tube, the one that goes to the water dispenser, you replace the reservoir tank that sits inside the fridge. It has the two lines leaving it permanently attached to the tank, hence you replace the whole thing. There are separate lines and a splice/union that can be used to replace just the last 6 inches near the compressor, but I chose to replace the whole unit. This describes replacing that water chill tank unit.

To replace the tank, you have to disconnect it from both ends, where its held in by plastic nuts/unions. Water remaining in the lines will drain out when you disconnect them. I unscrewed the valve assembly from the fridge body and then unplugged the plugs to the valves to do the work (but left the fridge plugged in).

To do this work, I needed to raise the fridge side edge of the appliance, since the hoses route along the underside of the fridge. After you disconnect the two ends (at the union on the freezer side bottom front egdge, and back side at the valve) you can pull the hoses up into the fridge. Routing the new hoses will require you have at least that one side off the floor to get your hands under it. I got two 6" tall 4x4 wood blocks and tipped the fridge slightly, raising the right (fridge) side off the ground and slid the blocks under the fridge rollers.

To remove the tank, before you raise the edge of the fridge, there are two screws that you need to remove (top side and left side) from the storage tank.

I recommend that in addition to removing the bottom two drawers, you remove all the bins hanging in the fridge door, since you need to work in there with gravity wanting to shut the door on you. Once you have the tank unscrewed (and the hose ends disconnected) note which hose(based on where it connects to the tank) goes to which hole in the bottom of the fridge. Pull up the hoses from the inside the fridge. The tank is free..go put it in the sink and drain the water out.

Installing the new tank, remove any hose end caps and route the hoses back through the lower drawer support frame you pulled them out of, and feed the correct hoses back through the holes in the bottom of the fridge. I found it better to feed the longer one first, which leads to the water dispenser/front. I could then pull that one up front from under the raised fridge and clip it in place and then route the other hose fully though its hole and route it to the back of the fridge to the valve. This way I ensured I was sending the right hose to the right destination.

You will likely have to trim the hoses once the tank is reattached as they are slightly long. Be sure
38 of 46 people found this instruction helpful.
Was this instruction helpful to you?
Thank you for voting!
Water leak from cracked Icemaker Water Line
This repair was done on a 13 year old fridge. Within the last several years I had to replace the Incoming Water Line twice, the line from the Inlet Water Valve to the Dispenser Water Reservoir, and this time the Icemaker Water line. These were all due to the plastic tubing hardening and becoming brittle from the heat of the compressor.

For this repair, I not only replaced the cracked Icemaker Line, I replaced the Incoming Water Line with copper, and replaced the Dispenser Water Reservoir. If you have a leak in one of the plastic water lines around the Valve Assembly, I recommend you do the same.

The Icemaker Water Line instructions from Stephen from Raleigh was very helful and complete.

I found Scot from Fort Collin's instructions on replacing the Reservoir very helpful too. Although I found his comment that one line was too short, to not be the case. In fact I had to trim both lines because they were too long.

Scott from South Lake Tahoe's suggestion to use the old Reservoir Lines to fish the new ones is good. I used duct tape to attach them together instead of drip irrigation fittings, and it worked fine. It helps to have somebody at the back of the fridge to pull the line while you push it from inside the fridge.

The line to the door connection can be accessed by removing the grill at the bottom of the front of the fridge.

Pretty easy repair. Thanks to the other contributors for the help!
23 of 38 people found this instruction helpful.
Was this instruction helpful to you?
Thank you for voting!
Tubing from vavle to reservoir had been degraded by compressor heat and had cracked, leaking water when door water dispenser was used.
- Disconnect the valve assembly and remove electrical connection to water dispenser valve to prevent accidental water discharge

- Note that one of the tubes on the new reservoir is 2' too short.

- Splice the piece of tubing trimmed from supply side of reservoir to the outlet side tube using the fitting purchased from the hardware store.

- Re-connect wires to valve solonoid and test for leaks.