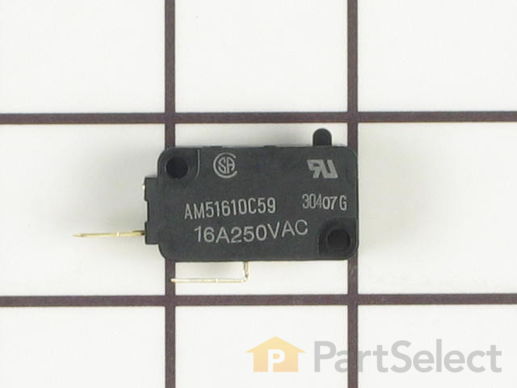 See part 95 in the diagram 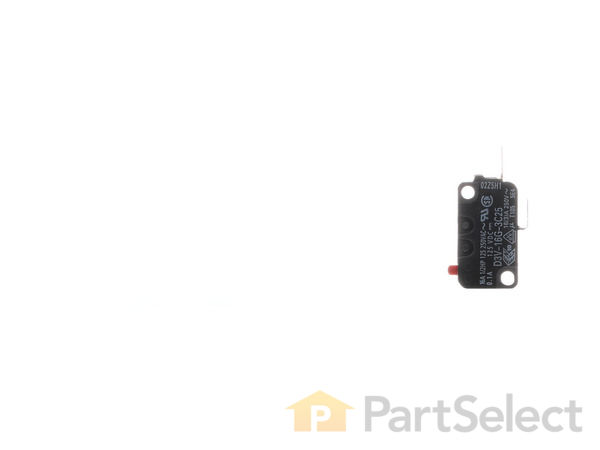 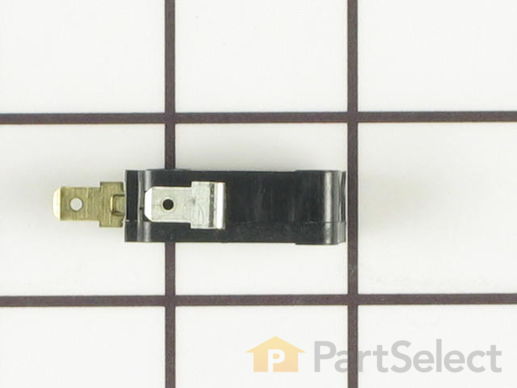 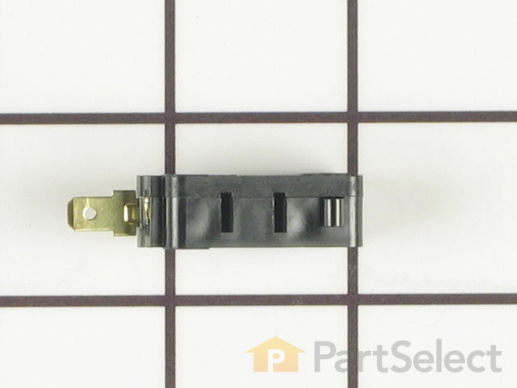 The secondary door switch is a simple on/off mechanism that stops the microwave from operating when the door is open (normally opened). The switch monitors the door latch position, and communicates whether the door is open or closed to the electrical control board. This door switch is approximately 1 inch long, and has 2 metal prongs called terminals that extend out of its body. Common symptoms related to a faulty secondary door switch include: microwave will not turn/shut off, or the microwave will not heat properly. NOTE: Before you begin this repair, first make sure your microwave is unplugged, and that your capacitor is discharged. A capacitor stores large amounts of electricity even when your microwave is unplugged.

103 questions answered by our experts.
Sort by:
Search filter: Clear Filter
Your search term must have 3 or more characters.
Keep searches simple. Use keywords, e.g. "leaking", "pump", "broken" or "fit".
Sorry, we couldn't find any existing answers that matched.Try using some different or simpler keywords, or submit your new question by using the "Ask a Question" button above!
ERNIE
Hello folk! I need your help! I have GE microwave & the lights fan clock etc work but it will not turn on to cook! Part is the issue? Do 7 have the part? Thanks sincerely;elo
For model number GE MODEL JVM1540SP1SS

Hi Ernie, great question. When this model of microwave will not start, it is most commonly a problem with the secondary door switch. You can find a replacement part using this part number: PS237421. You may also want to enter your model number into our Instant Repairman feature to determine what other parts could be causing this symptom. Thanks for you question and good luck with the repair.

Was this helpful?
Thank you for voting!
Michael
Needing to replace a faulty secondary door switch on my GE profile microwave (part # wb24x829). After cutting off the breaker to the microwave, do you have to discharge the capacitor in order to change the switch? If so, how do you discharge the capacitor before installing the new switch to avoid electrical shock? Thank you
For model number PVM1870SM3SS

Hi Michael, Thank you for your inquiry. Before you begin any repair please unplug the appliance from the electrical outlet. To replace the door switch in your microwave open the door and remove the screws securing the grille. Slide the grill to the left to release it. Next remove the screw on left securing the control panel and loosen the screw behind the panel. Lift the panel up and pull it forward to detach. Now remove the screws to release the switch assembly. Depress the release tab and the actuator to detach the switch you are replacing. Disconnect the wire connector to fully release the old switch. Install the new door switch by first connecting the wire connector. Position the new switch inn the assembly and snap it into place. Realign the switch assembly on the frame and replace the screws to secure. Reposition the control panel and tighten the screw behind the panel and replace the screw on the left. Reposition the grill on the microwave and slide it to the right. And replace the screws. Restore power to the microwave and it should be ready to use. I hope this helps. Thank you and have a great day!

Was this helpful?
Thank you for voting!
Ursula
How do i replace the secondary switch?
For model number JVM1740DM122

Hi Ursula, Thank you for your inquiry. Just beneath the photo of the part on our website you will find installation instructions on how to install this part. I hope this helps. Thank you and have a great day!

Was this helpful?
Thank you for voting!
Bob
I get no power to my microwave, lights, clock ,nothing. Checked the receptacle and i have power there.
For model number JVM6175EF1ES

Hello Bob, Thank you for the question. In most cased this would indicate the Thermoprotector (TCO - MAGNETRON) has blown and will need to be replaced. PartSelect #: PS2370185. Hope this helps!

Hi Jason, Thank you for your question. It sounds like you are going to have to replace your door switch. You do have three on your appliance. You can use a multi meter to test which one it is that you will need to replace. They should all read close to or on 0 ohms to be working. Good luck with your repair.

Was this helpful?
Thank you for voting!
Seth
Hello, only some of my touch pad is working. The microwave works as it should but some of my touch pad buttons are no longer working (1,2,7,8,9,0), but all other buttons work just fine. Which part do i need to fix this problem? Thank you.
For model number JVM1740DM1BB

Hello Seth, thank you for your question. If some of the buttons are working and others are not I would recommend replacing the key pad itself, Control Panel with Touchpad - Black part number PS1480892. Please enter the part number into the site for current price and availability. Good luck with your repair!

Was this helpful?
Thank you for voting!
Michael
My model has 3 switches are the two a secondary switch
For model number JVM1740DM1WW

Hi Michael, Thank you for your question. Yes, 2 of the switches are the secondary door switches. I hope this helps. Thank you and have a great day!

Was this helpful?
Thank you for voting!
Brian
When we open the the microwave door it starts working.
For model number JVM1840WD001

Hi Brian, Thank you for the question. I suggest testing the two Secondary Door Switches, PartSelect Number PS237421 and the Monitor Door Switch, Part Number: PS237422 with a multi meter to check for continuity to determine the defective switch. Hope this helps!

Was this helpful?
Thank you for voting!
Bonnie
Micro works but starts as soon as door is opened
For model number HVM1750DP1WW

Hello Bonnie, Thank you for your inquiry. It sounds like one of the door switches is not recognizing that the door is open, you can test the parts with a multimeter. If you are unfamiliar with how a multimeter functions, there are YouTube videos available to assist you.Hope this helps!

Was this helpful?
Thank you for voting!
Helmut
Micro wave does not heat
For model number JE1468K02

Hi Helmut, Thank you for the question. I suggest checking the High Voltage Diode, PartSelect Number PS239843 first. You will need a Multi Meter to test ohm reading on the part. You can also test the Magnetron, PartSelect Number PS239377.Remember, the microwave can still contain a large amount of electricity even when unplugged, so be sure to discharge the capacitor before performing the repair or testing. I hope this helps.

If it is not obvious which switch is bad, in our case the bad switch felt "soft" when we pressed the switch button with our fingers. A good switch has a firm "click" when pressed.

The switches are easy to replace - pop out the old switch (no tools required) and pull off the electrical connectors. Then pop in the new switch and reattach the connectors.
43 of 51 people found this instruction helpful.
Was this instruction helpful to you?
Thank you for voting!
Turntable won't move, no heat -but light and fan ok.
Remove the 2 Torx-15 screws at left of control panel. Work the control panel out by pulling slightly to the left first - it is engaged to the slotted holes to the right.

Remove the door's upper switch by lifting the tab and pulling out the switch carefully. To install the new switch, you may have to remove 2 philips screws holding the plastic assembly where the switches are mounted to the metal frame.

Diagrams on the website are misleading b/c the switch shown up on top of the other 2 switches is the switch w/ the NC (upper) terminal while you'll need the NO (lower) terminal for this repair (symptoms are: turntable won't move, no heat -but light and fan ok). I should have called before ordering the part (had to pay shipping twice)...

Once I got the right part, it works just like before.
40 of 49 people found this instruction helpful.
Was this instruction helpful to you?
Thank you for voting!
No heat in the microwave
We purchased our Microhood oven about 4 years ago along with the extended warranty package offered thru home depot. Within one year, the problems began. Each year the secondary switch would go bad rendering the microwave useless. If you have 3 small children like we do, you tend to use it a lot. We sure take the microwave for granted.

Each time G.E. would fix the problem at no charge. Ths time - the warranty had expired and GE wanted to charge us $80.00 for service call plus parts and labor. We estimated the cost to run at least $150.00 or more.

To top it all off, GE was going to have a service tech avail for over 2 weeks. This is poor customer service and completely unaccceptable.

Because this was a recurring problem, I figured it was the same part that had being going bad since we purchased the appliance. I decided to order the part "secondary switch" myself and attempt to fix the microwave on my own.